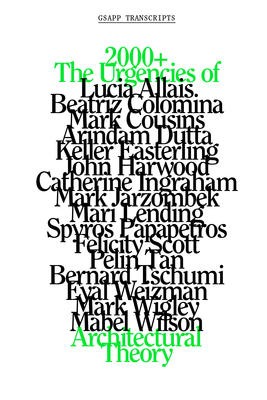 Has architectural theory become a historical phenomenon to be anthologized and studied as another passing phase in the history of the discipline? Do the current commonplace watchwords of "practice" and "research" mark the end of theory's place in architectural discourse? This edited volume posits the contrary--that theory remains urgent and even unavoidable, so ingrained in architectural practice and pedagogy that it remains a vital if sometimes latent influence. Architectural theory is not confined to its supposed heyday in the decades leading up to the year 2000; it has persisted and expanded as the stakes of theoretical discussions have transformed. 2000+: The Urgencies of Architectural Theory collects new essays from a range of the most compelling architectural historians and theorists of the moment, including Lucia Allais, Beatriz Colomina, Mark Cousins, Arindam Dutta, John Harwood, Catherine Ingraham, Mark Jarzombek, Mari Lending, Spyros Papapetros, Felicity Scott, Pelin Tan, Bernard Tschumi, Eyal Weizman, Mark Wigley, and Mabel Wilson. Brought together for a conference marking the end of Wigley's tenure as dean of Columbia University's Graduate School of Architecture, Planning and Preservation, these thinkers chart new directions and points of critical importance for theory in architecture.