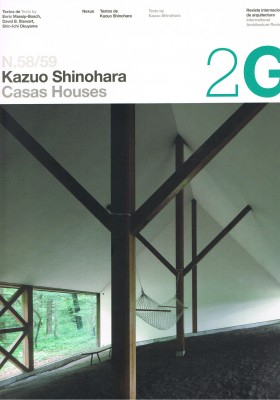 Kazuo Shinohara (1925-2006) has proved to be the most influential architect of his generation in shaping contemporary Japanese architecture. His influence stretches from Toyo Ito, Itsuko Hasegawa and Kazunari Sakamoto, via Kazuyo Sejima, to the many excellent young studios working today. Nevertheless, his work remains little known in the West, partly due to the scarcity of publications on his work - which in turn was due to the rigorous control the architect maintained over publication of his work. Shinohara carefully selected the photographs and texts that accompanied each project, and even refused Gustavo Gili's first proposal in 2001 to revisit and photograph his buildings. This publication has only been possible after his death in 2006, thanks to the generosity of the heirs. Shinohara's work from 1954 to the early 1980s consisted almost exclusively of single-family homes. After 1982, however, he began to work on larger institutional projects. This double issue of 2G focuses solely on his single-family homes and is the result of a long process of research to identify the site and condition of each of the houses. Some no longer exist, others have been altered considerably, but fortunately the majority remains and have been photographed exclusively for 2G by the Japanese photographer Hiroshi Ueda. In this way, we are able to present an unprecedented tour of Shinohara's houses, accompanied by numerous drawings and four original texts by the architect, all translated into Spanish for the first time (and two of them previously unpublished in English). Introductory texts by David B. Stewart, Shin-Ichi Okuyama and Enric Massip provide the necessary context for understanding the work of this almost mythical architect.