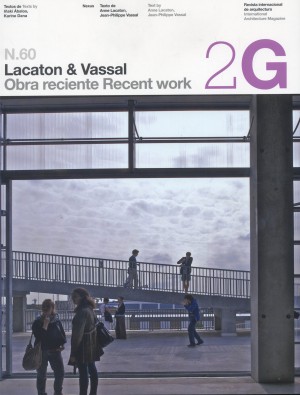 <a title="All titles by this author" href="http://www.nielsenbookdataonline.com/bdol/auth/booksearchadvanced.do?method=searchFromLink&index=author&value=Inaki+Abalos"></a>

Lacaton & Vassal have constructed a discourse of their own that, although seemingly simple, embraces the complexity of contemporary reality. The few, carefully chosen issues that interest them are tantamount, in themselves, to a wish to go beyond paradigms established by the market. Among them, we might point to recently finalized projects like the transformation of the Bois-le-Prêtre tower block in Paris—a built example of their investigation into how to act on obsolete blocks of flats from the 1960s and 70s in France (an investigation we include in our book Large-scale Housing Developments: An Exceptional Case)—two multi-family housing projects in Saint-Nazaire, and the School of Architecture in Nantes. In this volume we also present projects on a city scale such as an urban plan for Dublin, their proposal for the Porte de la Chapelle in Paris, and the La Vecquerie eco-area in Saint-Nazaire. Other projects that are representative of their recent trajectory are the scheme for Holcim Laboratories (Holderbank, Switzerland), the artwork storage facilities for the Fundação Serralves (Matosinhos, Portugal, and the building for the Fond Régional d’Art Contemporain Nord-Pas de Calais in Dunkerque, the completion of which is foreseen for 2013.