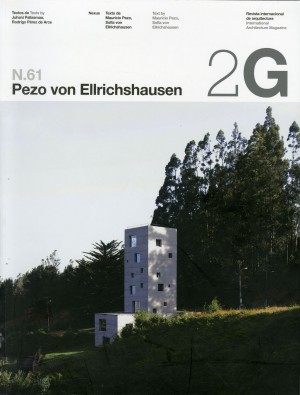 For years Chile has been putting forward new modes of architectural production from a small, hitherto peripheral location in terms of traditional centres of contemporary production. Architects of the stature of Mathias Klotz, Smijan Radic and Cecilia Puga testify to a strong renewal of Chilean architecture, which has its prolongation in the younger couple formed by Mauricio Pezo and Sofia von Ellrichshausen. Established in the city of Concepicon, south of Santiago de Chile, the Pezo von Ellrichshausen studio made a name for itself in 2005 following the construction of the Poli House. Since then, and despite their youth, they have consolidated themselves as one of the most promising professional studios on the contemporary architecture scene. This issue brings together the studio's built works and projects, single-family houses for the most part, which permit the reader to witness the evolution of the themes dealt with - from the compact, monolithic construction of the early dwellings, including interesting exercises in the use of courtyards, to the most recent theme of a rethink of the classic patio house.