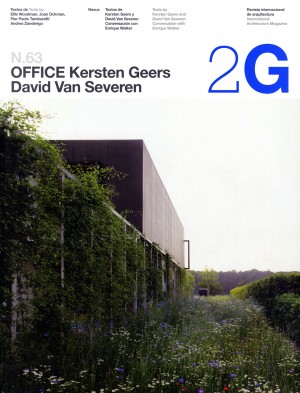 In recent years Belgian architects have been producing some of the most interesting work in Europe. Following in the wake of consolidated studios like Robrecht en Daem (2G N.55), Xaveer De Geyter or Stéphane Beel is a new generation of architects, which includes OFFICE Kersten Geers David Van Severen.

With a track record stretching back ten years, the studio of Kersten Geers and David Van Severen has tackled a diversity of projects: quasi-utopian city proposals, frontier posts, single-family houses, government buildings, exhibition designs and pavilions. Their architecture has not only to do with design solutions, but depends on radical reformulations.  Examples include their act of emptying the Belgian Pavilion in the 2008 Venice Biennale of Architecture and filling it with confetti, as well as their projects like the weekend house in Merchtem, their villa in Brussels or the design for the Kunstmuseum in St. Gallen.

This issue of 2G contains three introductory texts written by the British critic Ellis Woodman, the American historian Joan Ockman, and the architects and editors of the magazine San Rocco Pier Paolo Tamburelli and Andrea Zanerigo. To complement these, the Nexus section includes texts by the architects themselves and an interview with Enrique Walker. All the buildings have been photographed by the Dutch photographer Bas Princen.

Text in Spanish and English.