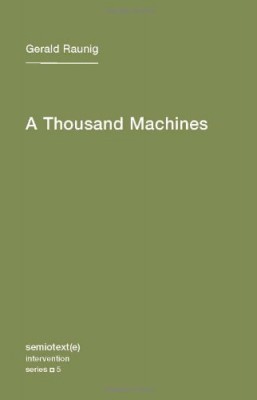 In this "concise philosophy of the machine," Gerald Raunig provides a historical and critical backdrop to a concept proposed forty years ago by the French philosophers Felix Guattari and Giles Deleuze: the machine, not as a technical device and apparatus, but as a social composition and concatenation. This conception of the machine as an arrangement of technical, bodily, intellectual, and social components subverts the opposition between man and machine, organism and mechanism, individual and community. Drawing from an unusual range of films, literature, and performance--from the role of bicycles in Flann O'Brien's fiction to Vittorio de Sica's Neorealist film The Bicycle Thieves, and from Karl Marx's "Fragment on Machines" to the deus ex machina of Greek drama--Raunig arrives at an enhanced conception of the machine as a social movement, finding its most apt and concrete manifestation in the Euro mayday movement, which since 2001 has become a transnational activist and discursive practice focused upon the precarious nature of labour and lives.