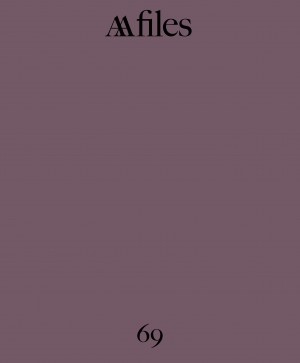 AA Files is the Architectural Association’s journal of record. Launched in 1981 by the AA School’s then chairman Alvin Boyarsky, the journal appears twice a year and is sent out to members of the Architectural Association, individual subscribers and is distributed to a global network of bookshops. Currently under the editorship of Thomas Weaver, AA Files looks to promote original and engaging writing on architecture. It does this by drawing on the AA School’s own academic research, lecture programme, exhibitions and events, as well as a rich and eclectic mix of architectural scholarship from all over the world.

AA Files 69 features essays by the historian Tim Benton on Le Corbusier's Maison Dom-ino, the writer Gillian Darley on John Summerson, the curator Nicholas Olsberg on Frank Lloyd Wright, the artist Pablo Bronstein on his Hawksmoor beach hut and two conversations one with American photographer Lewis Baltz, and the other with Spanish architect Ricardo Bofil.