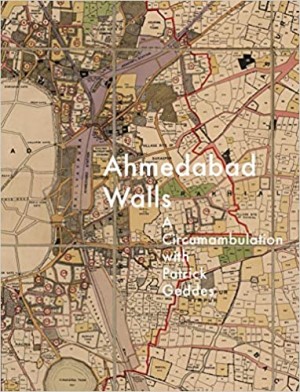 In April 1915, Scottish polymath Patrick Geddes visited the north Indian city of Ahmedabad to provide the Municipality with town-planning advice. Upon arrival, Geddes was confronted with the question that would frame his visit, Whether to demolish or retain the city's 500 year old fortifications? After a three day circumambulation, the polymath prepared a detailed defence in favour of retaining the city walls, titled 'Notes on Ahmedabad by Professor Patrick Geddes.' Ahmedabad Walls is a contemporary circumambulation, following the polymath's footsteps around the fortifications, unfolding his (unsuccessful) defence of the city walls along the way. The journey is supplemented with arguments in favour of city wall demolition, revealing the context in which Geddes' response evolved. 21st century photographs by Tina Nandi visualize Geddes' circumambulation one hundred years hence, while early 20th century photographs by *Pranlal Patel provide a glimpse of what the city would have looked like when Geddes walked her streets. *Pranlal Patel (1910-2014), Ahmedabad's first street photographer, was five years old when Patrick Geddes visited Ahmedabad. Permission has already been obtained to publish the photographs in this book, most for the first time.