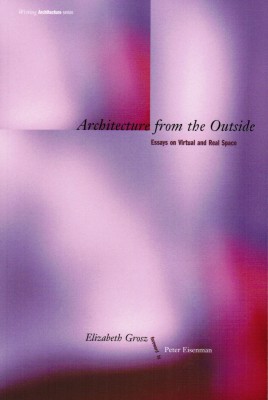 Architecture from the Outside. Essays on Virtual and Real Space

To be outside allows one a fresh perspective on the inside. In these essays, philosopher Elizabeth Grosz explores the ways in which two disciplines that are fundamentally outside each another—architecture and philosophy—can meet in a third space to interact free of their internal constraints. "Outside" also refers to those whose voices are not usually heard in architectural discourse but who inhabit its space—the destitute, the homeless, the sick, and the dying, as well as women and minorities.

Grosz asks how we can understand space differently in order to structure and inhabit our living arrangements accordingly. Two themes run throughout the book: temporal flow and sexual specificity. Grosz argues that time, change, and emergence, traditionally viewed as outside the concerns of space, must become more integral to the processes of design and construction. She also argues against architecture’s historical indifference to sexual specificity, asking what the existence of (at least) two sexes has to do with how we understand and experience space. Drawing on the work of such philosophers as Henri Bergson, Roger Caillois, Gilles Deleuze, Jacques Derrida, Luce Irigaray, and Jacques Lacan, Grosz raises abstract but nonformalistic questions about space, inhabitation, and building. All of the essays propose philosophical experiments to render space and building more mobile and dynamic.