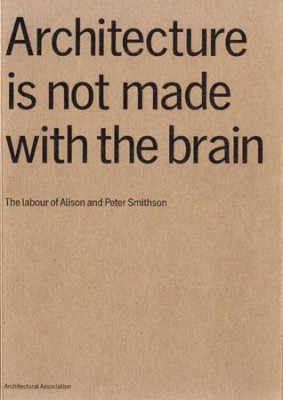 A unique record of the symposium hosted by the AA to celebrate the work of Alison and Peter Smithson, this publication also includes specially commissioned essays, among them an important piece on Robin Hood Gardens by Dirk van den Heuvel - co-curator, with Max Risselada, of 'Alison and Peter Smithson: From the House of the Future to a House of Today', Design Museum, London (2004).

The range of topics extends from close readings of individual works, such as the Economist building from where the book title originates, to contextual pieces on the historical and European settings. Between the two are personal accounts from clients and colleagues. Niall Hobhouse recounts the process of choosing a location for the Hadspen Obelisk; a piece partnered by Peter Smithson's own writing on the origins of the Obelisk. Accompanying the text on the Sugden House are contemporaneous notes reproduced from the Smithson Files.

Impromptu contributions from participants in the symposium come from Ron Simpson, a personal friend since college days, and Connie Occhialini, who worked with Peter at successive ILAUD Summer Schools. Also reproduced here is 'A Silent Showing', a series of slides selected by Soraya, Simon and Samantha Smithson from the family collection, and featuring buildings designed by their parents.

'The Smithsons' office was very much about the education of an architect. However the whole office was learning, including the Smithsons themselves. The concern of the office was unquestionably the search for and development of ideas, rather than just the expediency of fulfilling the fee stages of the RIBA forms of appointment.

'Mistakes were another way of developing and testing ideas.' Peter Salter