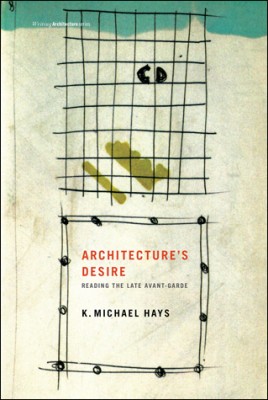 While it is widely recognized that the advanced architecture of the 1970s left a legacy of experimentation and theoretical speculation as intense as any in architecture's history, there has been no general theory of that ethos. Now, in Architecture's Desire, K. Michael Hays writes an account of the "late avant-garde" as an architecture systematically twisting back on itself, pondering its own historical status, and deliberately exploring architecture's representational possibilities right up to their absolute limits. In close readings of the brooding, melancholy silence of Aldo Rossi, the radically reductive "decompositions" and archaeologies of Peter Eisenman, the carnivalesque excesses of John Hejduk, and the "cinegrammatic" delirium of Bernard Tschumi, Hays narrates the story of architecture confronting its own boundaries with objects of ever more reflexivity, difficulty, and intransigence. The late avant-garde is the last architecture with philosophical aspirations, an architecture that could think philosophical problems through architecture rather than merely illustrate them. It takes architecture as the object of its own reflection, which in turn produces an unrelenting desire. Using the tools of critical theory together with the structure of Lacan's triad imaginary-symbolic-real, Hays constructs a theory of architectural desire that is historically specific and yet sets the terms and the challenges of all subsequent architectural practice, including today's.