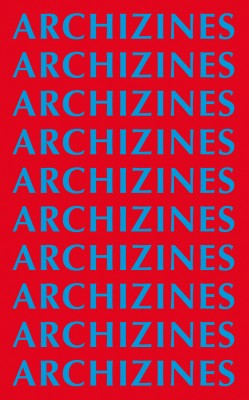 Edited by Elias Redstone, with essays by Pedro Gadanho, Iker Gil, Adam Murray, Rob Wilson and Mimi Zeiger
From photo-copied and print-on-demand newsletters such as Another Pamphlet, Scapegoat and Preston is My Paris, to beautiful magazines such as Mark, Spam and PIN-UP, ARCHIZINES celebrates and promotes the recent resurgence of alternative and independent architectural publishing from around the world.This catalogue, accompanying an exhibition at the Architectural Association, explores the relationship between architecture and publishing with contributions from Pedro Gadanho (Beyond), Iker Gil (MAS Context), Adam Murray (Preston is my Paris), Rob Wilson (Block), Mimi Zeiger (Maximum Maxim MMX/loudpaper) and more. Themes addressed in a series of new essays include the role of publishing in academia and architectural practice, and the representation of architecture in fictional writing, photography, magazines and fanzine culture.