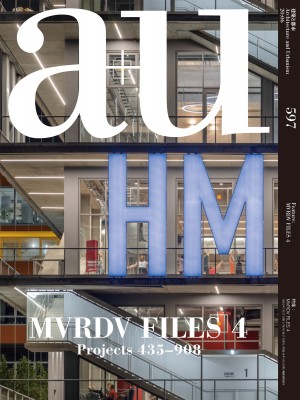 This issue of a+u magzine is the fourth in a series devoted to the work of MVRDV, following previous editions in 2002, 2007 and 2017. The projects are organised by project numbers which correspond to their starting dates.

MVRDV is an architectural office established in the Netherlands since 1993. Following our previous 3 series of MVRDV FILES in 2002, 2007 and 2017, a+u June issue – MVRDV FILES 4 focuses on the office’s ambitions to conceptualize sustainable “futureproof” buildings and cities as described in an essay by its cofounders, Winy Maas, Jacob van Rijs and Nathalie de Vries, along with the 23 projects featured.

The office prides itself on its visionary ideas of redefining spaces that we use every day. Whether it is the design of a new building or the re-purposing of an abandoned building, MVRDV capitalizes on every creative opportunity presented to them to rethink typologies and open up possibilities. Despite challenges faced during the COVID-19 pandemic, the partners at MVRDV came together in a web conference to share details about their studio’s projects and the experiences they’ve had when collaborating with clients, experts, and the public to find the best strategies.