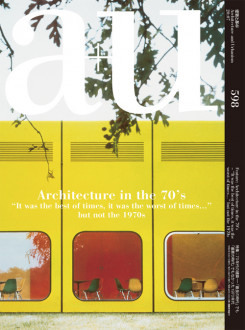 Guest editor Yasuhiro Teramatsu turns this issue’s focus on the turbulent 1970s. Precluded by the May Revolution of 1968 – a turning point for post-war society that encompassed many social and cultural reforms – the following decade’s sense of crisis and uncertainty nevertheless played out alongside a period of new thinking and experimentation in the architectural field. Historian of architectural theory Harry F. Mallgrave offers an analysis of the discourses that were particularly important and their connections to architecture, while taking into account the zeitgeist of this transformative period. Featuring numerous exemplary works, the result is a vital cross-section of the decade.