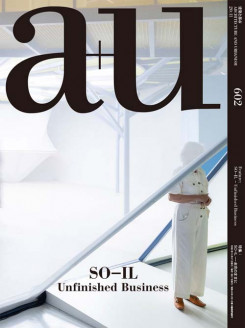 The magazine presents its first monograph to feature the work of SO–IL, an architecture firm based in New York City and headed by Jing Liu and Florian Idenburg. They spend much of their time thinking about boundaries in the built environment, the interfaces between them, and where our bodies fit in. Work by SO–IL appears in urban situations with confounding levels of structural complexity, yet still manages to integrate into them, encouraging touch and consideration rather than untangling from them. Besides a number of notable projects and works, the issue features an essay by Mohamed Sharif and a conversation between SO–IL and the Zurich-based office of Karamuk Kuo.