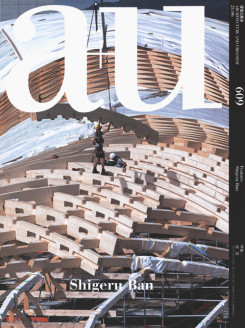 The June 2021 issue features the work of Shigeru Ban. Twenty-five projects spanning the two decades since Expo 2000 Hanover, drawn entirely from outside Japan, are presented here. As Michael Webb describes in the introductory essay, “Continuity is the core of Ban’s work”, and that persistence can be found in works ranging from small to large in scale, temporary to permanent in structure, and private to public in the commission. Competition proposals are featured alongside his built works – whether using his famous paper tubes, wood, or steel – to draw out the continuities between each work, while focusing on materiality as the organizing theme.