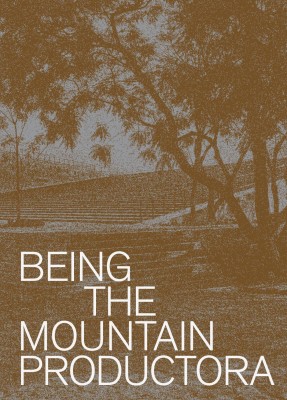 The publication casts new light on the relationship between modernism and the ground, calling into question received assumptions and liberating new possibilities for how a building relates to its site.

The result of research PRODUCTORA initiated as winners of the Mies Crown Hall Americas Prize for Emerging Practice at Illinois Institute of Technology, Being the Mountain examines the relationship between architecture and the ground it occupies, an interaction so obvious―a building must touch the ground―that it often remains underexplored. Richly illustrated contributions by Carlos Bedoya, Frank Escher, Wonne Ickx, Véronique Patteeuw, and Jesús Vassallo revisit significant moments in architectural history that cast new light on the techniques and legacies of modernism, especially in settings like Mexico and California, where architects such as Ricardo Legorreta and John Lautner incorporated dramatic natural topography in their agendas. Additional essays investigate the role of the ground in the thought of Kenneth Frampton in the 1980s and Luis Moreno Mansilla in the 1990s, as well as point to important parallels between premodern land practices, twentieth-century art, and today’s architecture.

Together, these episodes call into question our received assumptions and present new possibilities for the connection between a building and its site. A portfolio of related projects by PRODUCTORA concludes the book, further drawing out the idea of architecture as a form of constructed ground.