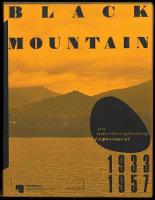 Founded in North Carolina in 1933, Black Mountain College ranks alongside the Bauhaus as one of the most innovative schools of the 20th century. Inspired by the forward-thinking pedagogical ideas of philosopher John Dewey, the experimental, interdisciplinary college combined the ideas of radical European modernism with the philosophy of American pragmatism and teaching methods designed to encourage personal initiative as well as the social competence of the individual. Visual arts, economics, physics, dance, architecture and music were all taught on an equal footing, and teachers and students lived together in a democratically organized community. The second director of the school was Josef Albers, and John Cage, Merce Cunningham, Buckminster Fuller, Walter Gropius, Franz Kline and Charles Olson were among its teachers. As a result, the college played a foundational role in the development of a range of avant-garde practices, and exerted an enormous influence on the development of the arts in the second half of the 20th century.