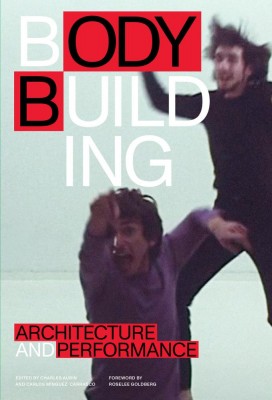 Performa is pleased to present Bodybuilding, a groundbreaking publication examining the use of performance as a critical tool to rethink architecture, its agency, goals, and aesthetics. Through a selection of historical and contemporary examples and analyses, Bodybuilding traces an alternative lineage of architects and architecture collectives which opted for staging actions and ephemeral situations rather than erecting buildings. Architecture, in its emphasis on permanence and stability, at first resists an easy pairing with live performance, commonly associated with ideas of ephemerality and elusiveness. But, beyond the surface differences, architecture and performance share a core concern: the interplay of bodies and space. Traditional narratives around this
relationship generally focus on the legacy of the early twentieth century avant-garde, as  well as 1960s and 1970sutopian projects coming out of "radical architecture" (Cedric Price, Archigram, and Superstudio among others). However, these instances are largely limited to theoretical or unrealized projects and very little has been written about architects who actually employ performance as a way to practice architecture and explore critical questions about the built environment, including its relationships with labor, security, race, migration, environment, gentrification, and modes of public assembly.