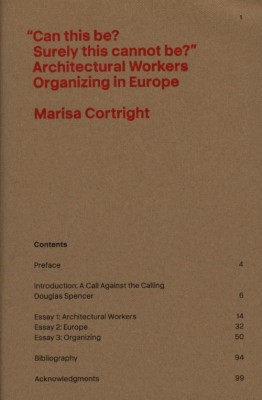 Drawing from the experiences and misgivings of architectural workers across Europe, including her own, Marisa Cortright argues that architectural workers would do well to recognize themselves as workers. In so doing, she suggests, they would be better disposed to challenge extractive and oppressive modes of architectural production. These essays on Architectural Workers, Organizing, and Europe link localized discontent and disappointment with the architectural industry to broader currents in anticapitalist struggle, from prison abolition to climate justice. By expanding what forms of collective action constitute “organizing” and questioning the ongoing project of “Europe,” this text sets forth a critique of architectural work beyond architecture.