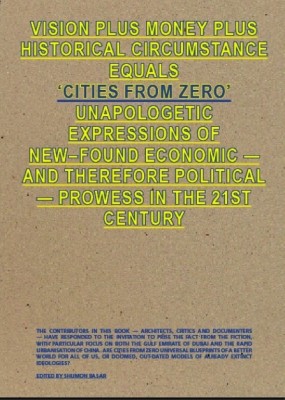 Edited by Shumon Basar, with essays by Amale Andra

At the start of the 21st century there has been a marked shift - both economic and political - from the West to the East. Dubai vies with other Gulf cities to create the ultimate Middle Eastern hub for business, culture and leisure. Chinas feverish construction industry is operating at an unprecedented scale, as it builds higher and faster than anyone else...

At the heart of these turbo-fuelled visions is a renewed commitment to the idea of the future city. What distinguishes these kinds of cities from the vast majority of those we already live in? One simple fact: most arise from a 'degree-zero' condition in the urban equivalent of seconds instead of decades. Cities from Zero focuses on Dubai and the Far East, and asks: are we in the presence of new, proto-typical urban conditions? Are these cities subject to and the product of particular political regimes? Do they merely further the clichés of globalisation by collaging the bad bits.