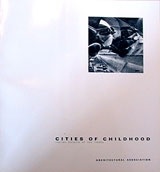 The Italian colonie of the early twentieth century were institutions which provided physical and educational activities for the children of the new industrial cities during their school holidays...

During the 1930s their potential both as an aid to the building of a strong, healthy nation and as an ideological training ground was quickly recognised by Mussolini's Fascist regime, which invested in a vigorous building programme. Commissions were often given to the younger, progressive generation of architects. This book tells the story of the colonie through reminiscences by Eduardo Paolozzi of his childhood experiences there, essays on the history of the phenomenon and its specific role in the 1930s, interviews with three important architects of the period, and descriptions and illustrations of some twenty buildings of particular interest.