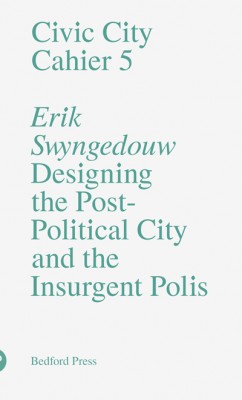 Designing the Post-Political City and the Insurgent Polis
Erik Swyngedouw

Reading the urban revolts and outbursts of irrational violence preceding and following the crisis of neoliberalism as sings of discontent and of a desire for alternative designs of the urban, Erik Swyngedouw reintroduces the idea of the (dead) polis as a space of political encounter. Techno-managerial policies of governing colonised the polis. Politics as dispute is replaced by the neoliberal, postdemocratic consensus. This condition, which designers of all kinds helped to shape, excludes disagreement and disavows conflict as the constitutive element of democratic politics.

For Swyngedouw, designing dissensus in the context of a post-political regime requires transgressing 'the fantasy that sustains the post-political order'. It would strive to redesign 'the urban as a democratic political field of dispute' and to produce 'common values and the collective oeuvre, the city'. While the city as polis may be dead, spaces of political engagement occur within the cracks, in between the meshes and the strange inter-locations that shape places that contest the police order. It is here that design, as a renewed political practice, can intervene.