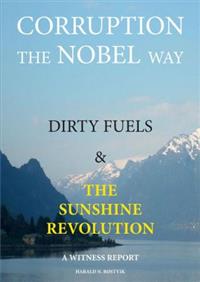 This book is an exciting overview of the global sunshine revolution now taking place and the future implications of these dynamic changes. The issues raised are universal.

It uncovers how early solar pioneers had to deal with biased attitudes, vested interests, double standards and dirty tricks. Now they are finally winning. Solar energy is about to become the most important and could become the dominating energy source in the world.
At the current rate of growth it could be bigger than oil in twenty years.

One of the most outspoken pioneers is a Norwegian professor. Through this book he tells the story of what happened, the people all over the world he worked with, the roads they built to the future and the sacrifices that were made. It is a personal, partly biographic story, filled with a wide range of supportive references.

Part of the story plays out in Norway, the world’s happiest country, according to the Human Development Index. Norway is also the world’s richest country per capita and one of the most beautiful countries in the world. Fifty years ago Norway was among the poorest nations in Europe. What happened? How did it make it to the top of the lists so quickly?

As seen through the author’s glasses, Norway is not what it appears to be; a social democratic model society. On the contrary, it is a shockingly egotistical and self-serving nation where some of the most predatory businesses are state owned. Around them, corruption the noble or “Nobel” way flourishes as arms, oil and farmed fish are spewed out into the world from a tiny nation with only five million inhabitants. Noble intentions are overcome by greed and the use of the Nobel Peace Prize to export “The Norwegian Way” is questioned.