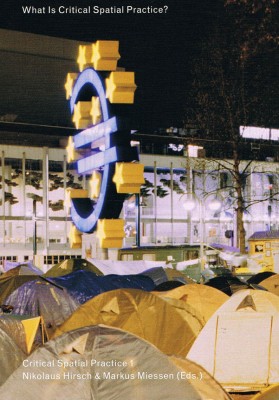 In September 2011, Nikolaus Hirsch and Markus Miessen invited protagonists from the fields of architecture, art, philosophy, and literature to reflect on the single question of what, today, can be understood as a critical modality of spatial practice. Most of the sixty-four contribu­tions presented in this volume were composed concurrently with the evictions of many of the Occupy movements, sustained turmoil in countries of the Arab Spring, and continued spasms in the global financial system, which, interestingly, all pointed at the question and problematic of whether archi­tecture and our physical environment can still be understood as a res publica. A response by the editors takes the form of a conversation.

This book is first in a series on critical spatial practice developed alongside the Städelschule program of the same name. Each edition includes work by invited artists—the first includes newly commissioned work by the photographer Armin Linke, who documented the Occupy camp around the European Central Bank in Frankfurt.