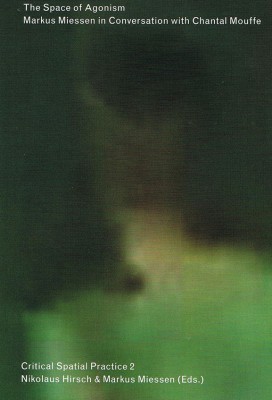 Including an artist project by Rabih Mroué

The second volume in the Critical Spatial Practice series presents a selection of conversations between Markus Miessen and political philosopher Chantal Mouffe. Taking place intermittently between December 2006 and October 2011, the dialogues attempt to unpack current dilemmas and popular mobilizations in terms of consensus-driven formats of political decision making. The conversations were alternately driven by Miessen’s specific concerns regarding his ongoing investigation into conflict-based forms of participation as an alternative (spatial) practice in democratic systems, and Mouffe’s understanding and theory of a “conflictual consensus.” Thinking in terms of agonism and “demoicracy”—a union that acknowledges the plurality and permanence of its different populations—the book proposes new approaches to countering and responding to the globalizing thrust of neoliberalism.