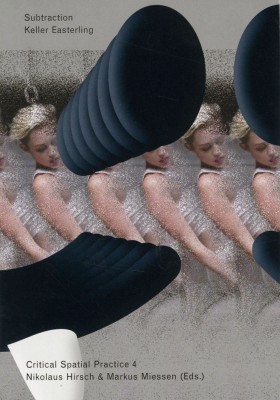 Unbuilding is the other half of building. Buildings, treated as currency, rapidly inflate and deflate in volatile financial markets. Cities expand and shrink; whether through the violence of planning utopias or war, they are also targets of urbicide. Repeatable spatial products quickly make new construction obsolete; the powerful bulldoze the disenfranchised; buildings can radiate negative real estate values and cause their surroundings to topple to the ground. Demolition has even become a spectacular entertainment.

Keller Easterling’s volume in the Critical Spatial Practice series analyzes the urgency of building subtraction. Often treated as failure or loss, subtraction—when accepted as part of an exchange—can be growth. All over the world, sprawl and overdevelopment have attracted distended or failed markets and exhausted special landscapes. However, in failure, buildings can create their own alternative markets of durable spatial variables that can be managed and traded by citizens and cities rather than the global financial industry.

These ebbs and flows—the appearance and disappearance of building—can be designed. Architects—trained to make the building machine lurch forward—may know something about how to put it into reverse.