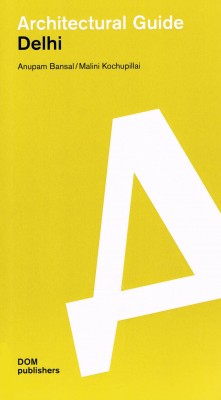 By Anupam Bansal and Malini Kochupillai

The prolific architectural legacy of Delhi is remarkable not only for its antiquity but also its diversity. While the period of antiquity encompass various types of Hindu, Islamic and Colonial architecture, it is modern architecture that laid the foundation of post-independent development of the city. Today, the city has been engulfed by an explosion of the built environment. One has to search for the forgotten or obscure jewels of architecture.

Architectural Guide Delhi introduces over 200 of these known or obscure examples of Delhi’s architecture particularly those built after india’s independence in 1947. All projects presented with over 450 photographs, texts and drawings have been contributed by various architectural practitioners in Delhi. Information about each entry is enhanced by geo-data in the form of QR codes.