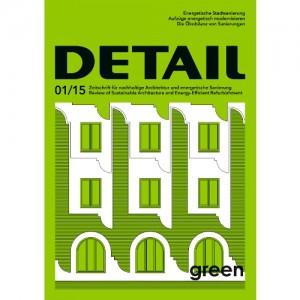 When it comes to renovations, the constraints are usually even tighter than when a new building is being designed; the technical requirements are more complex and there are more players involved who insist on having their say. Frequently, there is also less public recognition than for new buildings. Nevertheless, the future of building lies in renovations, which accounted for around three quarters of all investments in German housing construction in 2012. This is reason enough to dedicate an issue of DETAIL Green to the subject of conversion and renovation.

The examples of buildings in this issue of DETAIL Green show that energy-saving measures for buildings require far more than mere thermal insulation. The challenge often begins with the task of maintaining the usability of an old building for additional decades, thus preventing its demolition. To this end, the structural design, the floor plans, the access routes, fire protection measures, as well as many other aspects usually have to be up-dated.