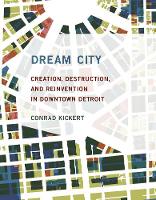 Tracing two centuries of rise, fall, and rebirth in the heart of downtown Detroit. Downtown Detroit is in the midst of an astonishing rebirth. Its sidewalks have become a dreamland for an aspiring creative class, filled with shoppers, office workers, and restaurant-goers. Cranes dot the skyline, replacing the wrecking balls seen there only a few years ago. But venture a few blocks in any direction and this liveliness gives way to urban blight, a nightmare cityscape of crumbling concrete, barbed wire, and debris. In Dream City, urban designer Conrad Kickert examines the paradoxes of Detroit's landscape of extremes, arguing that the current reinvention of downtown is the expression of two centuries of Detroiters' conflicting hopes and dreams. Kickert demonstrates the materialization of these dreams with a series of detailed original morphological maps that trace downtown's rise, fall, and rebirth. Kickert writes that downtown Detroit has always been different from other neighborhoods; it grew faster than other parts of the city, and it declined differently, forced to reinvent itself again and again. Downtown has been in constant battle with its own offspring-the automobile and the suburbs the automobile enabled-and modernized itself though parking attrition and land consolidation. Dream City is populated by a varied cast of downtown power players, from a 1920s parking lot baron to the pizza tycoon family and mortgage billionaire who control downtown's fate today. Even the most renowned planners and designers have consistently yielded to those with power, land, and finances to shape downtown. Kickert thus finds rhyme and rhythm in downtown's contemporary cacophony. Kickert argues that Detroit's case is extreme but not unique; many other American cities have seen a similar decline-and many others may see a similar revitalization.