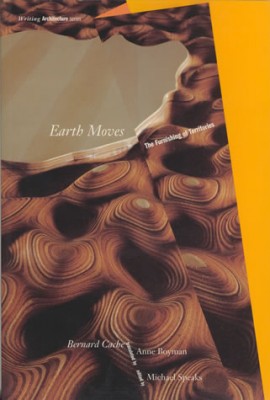 Earth Moves. The Furnishing of Territories

Earth Moves, Bernard Cache's first major work, conceptualizes a series of architectural images as vehicles for two important developments. First, he offers a new understanding of the architectural image itself. Following Gilles Deleuze and Henri Bergson, he develops an account of the image that is nonrepresentational and constructive—images as constituents of a primary, image world, of which subjectivity itself is a special kind of image. Second, Cache redefines architecture beyond building proper to include cinematic, pictoral, and other framings. Complementary to this classification, Cache offers what is to date the only Deleuzean architectural development of the "fold," a form and concept that has become important over the last few years. For Cache, as for Deleuze, what is significant about the fold is that it provides a way to rethink the relationship between interior and exterior, between past and present, and between architecture and the urban.