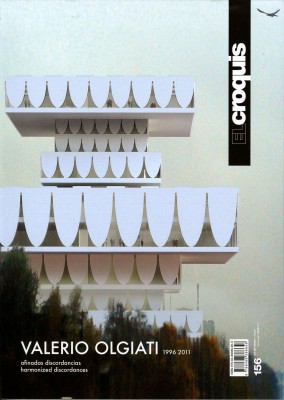 Valerio Olgiati (b 1958) studied architecture at ETH in Zürich and lived and worked first in Zürich and later in Los Angeles for some years. In 1996 he opened his own practice in Zürich and in 2008 with his wife Tamara Olgiati in Flims. Projects include a school in Paspels, the Lake Cauma Project in Flims, the Bardill Studio in Scharans, the Visiting Center of the Swiss National Park in Zernez, the white concrete Projection Room Gornergrat located 3100 meter above sea level in Zermatt, Olgiati’s own office in Flims, the Learning Center EPFL in Lausanne, and the new entrance of the Grisons Parliament Building in Chur. Also includes an iconographic autobiography of important images stored in Olgiati’s head. Interview with Olgiati by Markus Breitschmid.