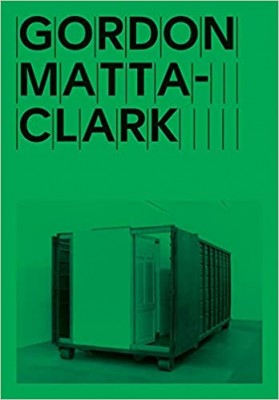 In 1972, Gordon Matta-Clark (1943-78) installed a dumpster on the street between 98 and 112 Greene Street in New York's SoHo neighborhood, an architectural artwork he called Open House. Matta-Clark used discarded, scavenged materials--old pieces of wood, doors--to subdivide the space inside the dumpster, creating corridors and small rooms within the container. Dancers and artists moved around the space, their pedestrian movements activating the sculpture and captured in a Super-8 film of the piece.

Matta-Clark is best known for his building cuts and architectural interventions. Because of the nature of this work and its context--sited in spaces abandoned or slated for demolition--Matta-Clark's "anarchitecture" was almost necessarily ephemeral, surviving as only documentation and sculptural sections. Open House (1972) is the only still-extant architectural piece by Matta-Clark.

Gordon Matta-Clark: Open House is the first publication to focus on this crucial piece by the artist, using it as a way into his complex body of work. Featuring contributions from Sophie Costes, Thierry Davila and Lydia Yee, this volume takes a historical and theoretical approach to Open House and Matta-Clark's entire oeuvre.