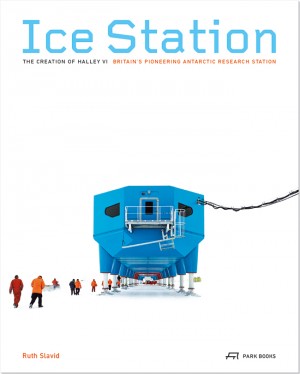 Halley VI Research Station in Antarctica is the world’s first fully re-locatable research station which is built on the floating Brunt Ice Shelf, one of the most remote and isolated locations in the world where temperatures can plummet to -55°C. Pushing the boundaries of design in a life critical environment, Halley VI is a beacon for sustainable living in polar regions, providing a home from home for the research teams who are responsible for some of the most significant science conducted on our planet.

Designed by Hugh Broughton Architects and AECOM for the British Antarctic Survey, Halley VI is a triumph of British design, innovation and engineering. The station was constructed by Galliford Try over four Antarctic summers and launched in 2013, 100 years after Captain Robert Falcon Scott’s Antarctic expeditions, signifying a new dawn for polar scientific research.

Published by Park Books, Ice Station tells the full story of Halley VI’s design, construction and legacy, captured with an engaging narrative and comprehensively illustrated with sketches, drawings and photographs of the prefabricated modules in construction and the completed station.