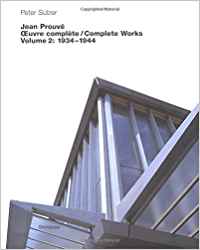 Jean Prouvé (1901-1984) was one of the most renowned design engineers of the 20th century. This volume, the second in Birkhäuser s 4-volume edition of Prouvé s Complete Works, covers the period between 1934 and 1944, including such significant works as the semi-metal Chair no. 4 and its variations, which went into serial production from 1935 onwards, office furniture for the Parisian Electricity Supply Works and seating for the lecture hall of the École des sciences politiques in Paris. In 1934 Prouvé s workshop commenced production of entirely pre-fabricated sheet metal buildings such as the Flying Club at Buc. One of the triumphs of this period is the Maison du Peuple communal hall in Clichy, an outstanding monument of functionalism and a hymn to metal and folded sheet. This volume also includes texts of previously unpublished conversations with Prouvé about the Flying Club and Maison du Peuple.