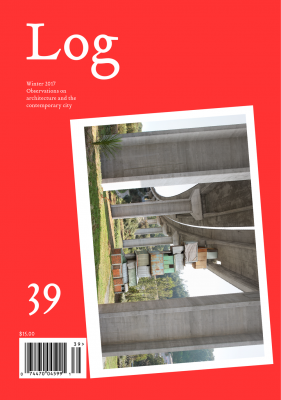 Log 39 looks at a changed political landscape and an evolving urban environment, offering reflections on architecture and the contemporary city both in the United States and around the world. The Winter 2017 issue features incisive commentary by critics and historians on recently completed buildings – from BIG’s VIA 57 West and WORKac’s 93 Reade Street in New York to Herzog & de Meuron’s Elbphilharmonie in Hamburg to Archi-Depot, a museum dedicated to architecture models in Tokyo. In addition, Michael Meredith, Valéry Didelon, and Eric Owen Moss contribute writing on the aesthetic of indifference, the history and future of OMA’s 1989 Euralille masterplan, and a pseudo-scripture for architects. In a special section, practitioners, critics, and activists address the possibility of architecture in the age of Trump.