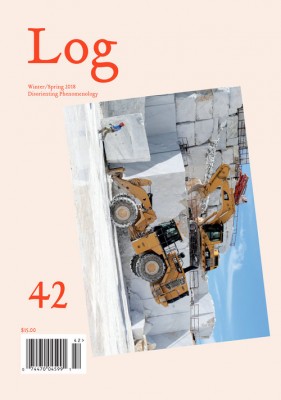 Subtitled “Disorienting Phenomenology,” the thematic 204-page Winter/Spring 2018 issue presents 18 essays by philosophers, theorists, art and architectural historians, and architects that range from Mark Jarzombek’s close reading of the first three sentences in Husserl’s Ideas: General Introduction to Pure Phenomenology to Caroline A. Jones’s historical analysis of phantom phenomena in Doug Wheeler’s work Synthetic Desert; from Charles L. Davis’s speculations on an architectural phenomenology of blackness to Adrienne Brown’s look at the role of space in producing racialization. In addition, Norwood – himself a philosopher/architect – talks with Jorge Otero-Pailos, author of Architecture’s Historical Turn: Phenomenology and the Rise of the Postmodern, a key reassessment of the idea of architectural phenomenology first put forth in the mid 20th century.

As Norwood concludes, “Architecture doesn’t need a phenomenology; it needs phenomenologies.” Log 42 is a critical observation of those phenomenologies that reflects architecture’s and society’s increasing awareness of the sociocultural richness to be had in diversity.