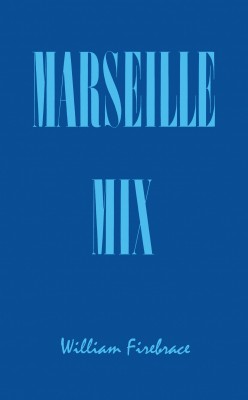 Marseille Mix describes the city of Marseille, its culture, buildings, gastronomy, cinematic images, history, planning, language, music, detective stories, criminology. These aspects of the city interrelate and overlap, to create a complex ever shifting image.
Marseille lies on the edge of Europe, separated from the rest of France by a circle of high mountains. It looks outwards to the Mediterranean, relating more to the exterior world than back to the rest of France. It is one of the oldest cities of western Europe, with traces of prehistoric inhabitation, a trading city founded by the Greeks, a flourishing medieval culture. Once one of the busiest ports in the world, its harbour is now in now largely empty. With its sea-trade almost abandoned, Marseille has lost its traditional purpose. It is like a sea creature marooned on the land, uncertain as to whether to settle or move on.

In seven chapters (in reference to the seven hills surrounding Marseille and the seven seas to the south) the book uses various forms of writing – essay, narrative, description, list, recipe, glossary, conversation – to examine the city and investigate its defining mix.

'The phrase fascinating urban history sounds like either an oxymoron or the marketing copy kiss of death, but William Firebrace has succeeded in writing exactly this in Marseille Mix, a relentlessly intriguing book about this relentlessly intriguing city. Firebrace has an impressive knowledge of the city's history, its architecture, its varying populations, its politics, as well as its depictions in literature, film, and the popular imagination ... Like all the AA's books, Marseille Mix is handsomely designed and produced and, although unillustrated, as illuminating a picture of any city as you're likely to read.' Kevin Lippert, Princeton Architectural Press, Assembly Journal (www.assemblyjournal.com)

William Firebrace is an architect and author, and teaches in various London schools of architecture including the Architectural Association School of Architecture.