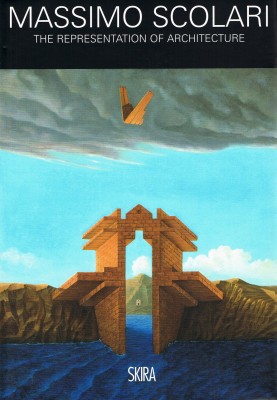 Massimo Scolari was Professor of Theories and Methods of Representation at the School of Architecture in Venice from 1973 until 2000, and also worked as an internationally recognised painter and designer. A versatile artist, Scolari is also an editor of several architecture journals and a member of the Paris “Bureau de la Recherche Architecturale” international scientific committee. This publication presents a significant number of works produced between 1965 and 2011, which trace the entire trajectory of Scolari’s artistic production: oil paintings and watercolours, installations, ink and pencil drawings, elevations, sections, architectural models, and theatre sets and costumes.

One of the main objectives of this edition is to clarify the central role played by representation in Scolari’s work. In order to do this, the texts included in the book address Scolari’s focus on the visualization of the architectural idea, a feature of his approach that allows him to detach the discipline from some of its more conventional procedures of embodiment, construction, and realization. This is important at a moment when a prevailing emphasis on digital technology and constructive technique can tend to obscure the relationship between the imagination and the hand of the architect in the design and production of architecture.