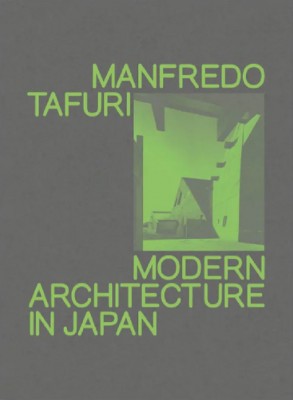 Manfredo Tafuri (1935–1994), the celebrated Italian architectural historian, published L’architettura moderna in Giappone in 1964. At the time, Tafuri was twenty-nine years old and had not visited Japan. His slim volume on the country’s postwar architecture was the first in a series of guidebooks on contemporary architecture under the direction of Leonardo Benevolo. Here, translated into English for the first time, the book presents a rare outsider’s view of the Metabolist movement and figures such as Kenzō Tange by one of the most astute critics of the second part of the twentieth century.

Tafuri’s ideas about Japanese architecture were primarily formed through texts, including magazine articles and contemporary photographs. How did Tafuri come to select the achievements of Japanese architects as the focus of his reflections on modern architecture? What happens when a historian of architecture relies purely on photographs for making judgments about a building? Edited and introduced by Mohsen Mostafavi, this volume reflects on these questions and more, presenting the translated text alongside essays by Marco Biraghi, Catherine Ingraham, Ken Tadashi Oshima, Federico Scaroni, and Hajime Yatsuka, as well as a rich collection of images. Together, these materials situate the reader in relation to Tafuri’s scholarship, the histories of Japanese architecture and Italian criticism, and the idiosyncrasies of this luminous text.