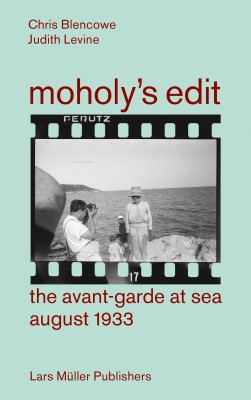 By Chris Blencowe and Judith Levine

The Greek island sequence montaged by László Moholy-Nagy into his legendary documentary Architects’ Congress can be interpreted, like his provocative photoplastiks, as a “message in a bottle” thrown into the sea that “might take decades for someone to find and read.” Capturing the incomparable Greek light, it presents a compelling glimpse of the four days and nights in August 1933 when the elite of the European architectural and artistic avant-garde—in Greece for the 4th International Congress of Modern Architecture (CIAM)—took to the Aegean in a barely-seaworthy “nutshell” that would bring them close to the brink of disaster. The “motley crew” included Le Corbusier, Fernand Léger, Amédée Ozenfant, Sigfried Giedion, Cor van Eesteren, and Otto Neurath. Crucial to the success of the surreal odyssey were members of the Greek avant-garde. Drawing on previously unpublished material—Moholy’s poetically ironic letter to his wife Sibyl, Ghika’s candid Memoirs of Le Corbusier, and forensic examination of the architect’s sketchbooks—the authors reconstruct the epiphanies, debates, and, inevitably, estrangements at this critical moment in European history.