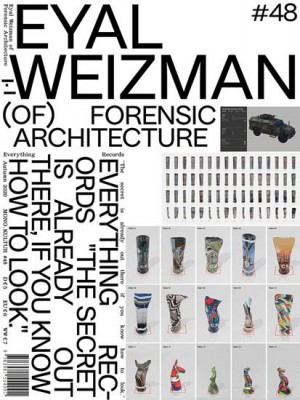 Made up of architects, lawyers, journalists, scientists, and more, Forensic Architecture is part investigative research lab, human rights activism hub, political think tank, journalism bureau, artists’ collective, and detective agency. Based at Goldsmiths, University of London, the group investigate the wider repercussions of human rights and environmental violations by the means of architectural thinking. In 10 years of work, they have researched illegal detention sites in Cameroon, examined police shootings in Chicago and elsewhere, modelled a prison in Syria using victims’ memories of sound, and digitally recreated the fires at Grenfell Tower in London. At its forefront is Eyal Weizman, a British Israeli architect.

Born in 1970 in Haifa, Weizman studied at the Architectural Association in London before gaining international recognition with an exhibition of models of Jewish settlements built in the occupied Palestinian territories. The work spoke of his projects to come: of his use of architecture as a means of investigation, and refusal to be silenced by those in a position of power. With mono.kultur, Eyal Weizman talked about obsessing over split seconds, information as a form of power, and the smell of tear gas.