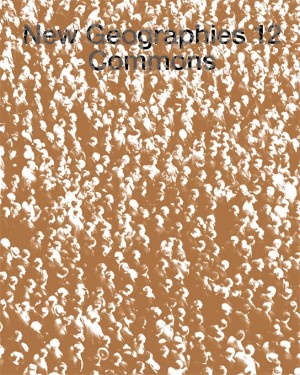 The commons as a contested political idea has been continually articulated and reproduced in many disciplines and in relation to specific historical and geographical contexts. Since the 1960s, the concept of commons has started to play an increasingly important role in the field of urban studies. While commons are usually perceived as the material spaces of the city such as streets, parks, public spaces, etc., they are also perceived as the immaterial public realm—including subaltern and mainstream culture, knowledge, language, and modes of sociality. As the commoning process continuously involves the substance of urban spaces, be it physical or virtual, the concept of commons has actively contributed to reshaping spatial imaginaries such as urban islands, archipelagos, and thresholds.

This issue of New Geographies proposes the concept of commons as a mode of thinking that challenges assumptions in the design disciplines such as public and private spaces, local and regional geographies, and capital and state interventions. It expands the production of space as the commons into a planetary territory all the way from the intimate and subjective scale of the body to the connected material and immaterial spaces. In doing so, NG 12 aims to foreground the significance of political thinking in the process of space production, and invites to imagine alternative social relations and modes of urbanization.