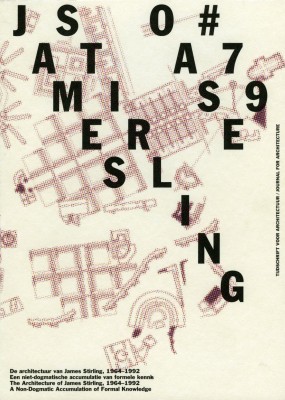 OASE 79 is devoted in its entirety to the architecture of the British architect James Stirling (1926-1992), who played a prominent role in the architecture discourse of the 1980s due to his striking buildings from the 1960s and ’70s. His archi¬tecture, for which he was awarded the third Pritzker Prize in 1981, was praised by critics as emblematic of the British New Brutalism, while his later work is read as the clearest testimony to the transition from modernism to postmodernism. However, because Stirling’s architecture was elevated to being an icon of specific architectural movements, the interest in his work waned as soon as a newer discourse claimed people’s attention. Besides losing its topical relevance, the enduring significance of his oeuvre was called into question. With the benefit of a few decades of hindsight, OASE is looking back at the architecture of James Stirling and shedding new light on its potential relevance to today’s architecture debate. This monographic issue detaches the oeuvre from the era in which it was created in order to re-examine it as ‘literal architecture’, an architecture that reveals its intentions in the way it is materialized and experienced as space and form. On the basis of short essays, primarily by practising architects, as well as longer reflective articles, Stirling’s oeuvre is reinter¬preted as a continuous exploration of the language of architecture. Complemented by a selection of projects that are presented using original architectural drawings as well as recently shot photographs by Bas Princen, OASE 79 investigates the architecture of James Stirling as a coherent but non-dogmatic accumulation of formal knowledge.