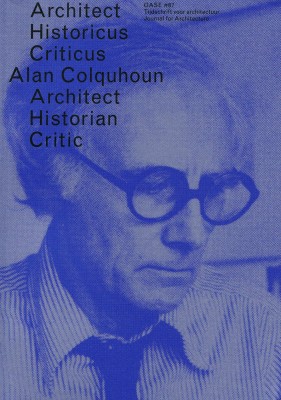 OASE 87 is dedicated to the thinking and the position of British architect Alan Colquhoun.  The issue presents not only the different themes that Colquhoun has addressed in his work, but also the various positions that he has taken in his career as scholar, critic and practitioner.

Alan Colquhoun (b. 1921) has managed for decades to link his practical experiences with a particular way of thinking about architecture history and theory. Colquhoun has been making his mark since the 1950s, with constructive contributions to the discourse and the theorization of architecture. He has written such trendsetting books as The Oxford History of Modern Architecture and Essays in Architectural Criticism and Modernity and the Classical Tradition. Colquhoun’s work illustrates that architecture – even today – needs its own theory and cultural position.