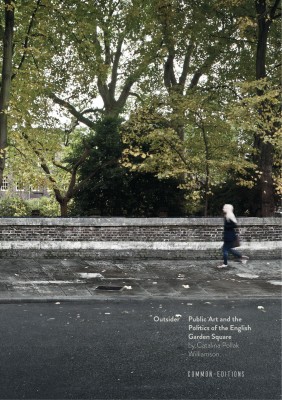 Railings are everywhere in the urban landscape. Their often ornamental appearance belies their function: to restrict public access, and determine the behaviours sanctioned within the areas they enclose. Outsider: Public Art and the Politics of the English Garden Square incites us to take a closer look at railings, and further, to question the politics of control behind their function and use.

This book, published by common-editions, is a complement to Catalina Pollak Williamson’s Phantom Railings (2012–2014), a public artwork inspired by a particular episode in London’s social (and spatial) history: the removal of railings from London’s private squares and gardens as part of the 1940s war effort, the subsequent ‘democratisation’ of green space in the city, and the ruling decision to reinstate fences in the newly accesible public spaces. Outsider features an essay by Todd Longstaffe-Gowan, describing the rise of the English garden square and the major debates around their ownership; a conversation between Catalina Pollak Williamson and Jeremy Deller about public art, politics and the idea of ‘play’ as an essential human need, as well as a visual account of Pollak Williamson’s Phantom Railings, including a section of the stunning ’score’ generated by this urban instrument.