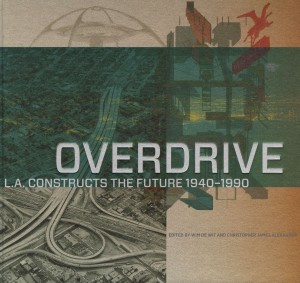 From 1940 to 1990, Los Angeles rapidly evolved into one of the most populous and influential industrial, economic, and creative capitals in the world. During this era, the region was transformed into a laboratory for cutting-edge architecture. Overdrive: L.A. Constructs the Future, 1940—1990 examines these experiments and their impact on modern design, reframes the perceptions of Los Angeles’s dynamic built environment, and amplifies the exploration of the city’s vibrant architectural legacy.

The drawings, models, and images highlighted in the Overdrive exhibition (J. Paul Getty Museum, 2013) and catalogue reveal the complex and often underappreciated facets of Los Angeles and illustrate how the metropolis became an internationally recognized destination with a unique design vocabulary, canonical landmarks, and a coveted lifestyle. This investigation builds upon the groundbreaking work of generations of historians, theorists, curators, critics, and activists who have researched and expounded upon the development of Los Angeles. In this volume, thought-provoking essays shed more light on the exhibition’s narratives, including Los Angeles’s physical landscape, the rise of modernism, the region’s influential residential architecture, its buildings for commerce and transportation, and architects’ pioneering uses of bold forms, advanced materials, and new technologies.

Los Angeles’s ability to facilitate change, experiment, recalibrate, and forge ahead is one of its greatest strengths. Future generations are destined to harness the region’s enviable resources to create new layers of architectural innovations.