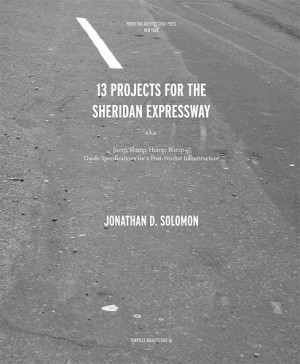 Conceived as a set of "Flexible Standards," this new addition to the Pamphlet Architecture series (p.52) proposes a new way of thinking about roadways in cities. By reexamining the urban expressway as a political, physical, and mythic manifestation of American culture, this compelling pamphlet serves as a design manual for planners, a novel atlas for drivers, and a collection of proposals that reaffirm the role of architecture in urban planning.

The thirteen projects take as their subject a site of contested transportation infrastructure - the Sheridan Expressway. By proposing new typologies for this site, these studies seek to mediate the spaces in the city where local and regional meet. Referencing the introduction of the modern parkway into the Bronx, the grading of the Central Park transverse roads, and other works that have redefined the relationship between parks and roads, author Jonathan Solomon suggests a system by which large projects might again be built in American cities.