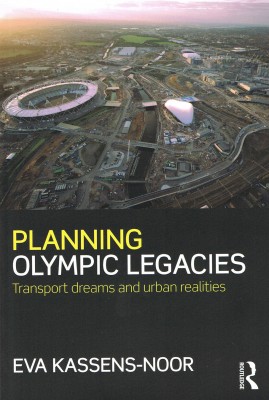 When a city wins the right to hold the Olympics, one of the oft cited advantages to the region is the catalytic effect upon the urban and transport projects of the host cities. However, with unparalleled access to documents and records, Eva Kassens-Noor questions and challenges this fundamental assertion of host cities who claim to have used the Olympic Games as a way to move forward their urban agendas In fact, transport dreams to stage the "perfect Games" of the International Olympic Committee and the governments of the host cities have lead to urban realities that significantly differ from the development path the city had set out to accomplish before winning the Olympic bid. Ultimately it is precisely the IOC's influence--and the city's foresight and sophistication (or lack thereof) in coping with it--that determines whether years after the Games there are legacies benefitting the former hosts. The text is supported by revealing interviews from lead host city planners and key documents, which highlight striking discrepancies between media broadcasts and the internal communications between the IOC and host city governments. It focuses on the inside story of the urban and transport change process undergone by four cities (Barcelona, Atlanta, Sydney, and Athens) that staged the Olympics and forecasts London and Rio de Janeiro's urban trajectories. The final chapter advises cities on how to leverage the Olympic opportunity to advance their long-run urban strategic plans and interests while fulfilling the International Olympic Committee's fundamental requirements. This is a uniquely positioned look at why Olympic cities have -- or do not have -- the transport and urban legacies they had wished for. The book will be of interest to planners, government agencies and those involved in organising future Games.