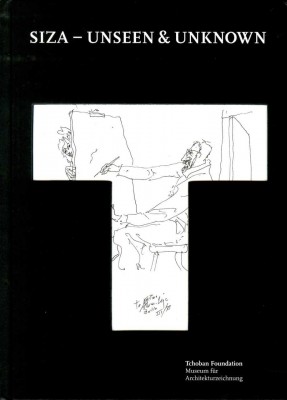 Álvaro Siza was born in 1933, on the same year that the Bauhaus closed its doors. He is perhaps the last living modernist or, at the very least, the most significant voice to carry out the unfinished modernist project all the way into the 21st century. 'Siza – Unseen & Unknown' showcases this continuity through 100 sketches, as well as its contradictions. These drawings are from his most personal archive, in addition to small collections of close friends and family. Hence, they focus not only on the professional legacy but also on the familial one, where Maria Antónia Siza (1940– 1973) takes centre stage. His wife will draw him, he will draw her and the loving embrace of the human body will be transversal to architecture, art, life. In many ways, the Bernini folds of Maria Antónia’s clothes and hair develop in Siza’s own ink lines and this anthropomorphic research goes on long after her death at just thirty two years old. Those bodies will grow increasingly more abstract, like the Venus de Milo, losing its limbs and becoming something more.
Those arms multiply and turn back into architecture and geometry in their son’s work, Álvaro Leite Siza (1962). Father and son labour independently on related themes, themes of mythology and religion, where the Hellenic sacred feminine is ever-present. Robes come down and monks or nuns transfigure into sensuous figures, intertwined in the marital bed – where we last say goodbye to Maria Antónia, revealing the importance of family. The future is now in the hands of a grandson, Henrique Siza (1992). Overall, each sketch is a window to the world, both literally and metaphorically. Ensembled together, like a fenêtre en longueur, they give us perspectives of different landscapes, playing with the proportion of that which is represented in them and with the scale of the museum itself, like a flip book in a condensed treasure box inhabited by mankind.